Knowing people’s needs and feelings about meat helps to develop the best strategy to promote alternative plant-based protein sources. Therefore, PROTEIN2FOOD partner Louis Bolk Institute (LBI) from the Netherlands carried out a study, including 28 Dutch participants, to analyse their attitude towards the consumption of meat and their plant-based alternatives.

The participants included in this study are the so-called “meat reducers”, which is one of three different consumer categories towards eating meat, as proposed by previous research.1 The other two groups are “meat lovers” and “meat avoiders”. This earlier investigation revealed that the majority of people in the Netherlands and the UK (50-70%2,3) belong to that group. Other Northern European most likely will follow a similar trend. Meat reducers are those people who have at least one meatless day per week, love to pick vegetarian options but still enjoy the occasional piece of meat. They are also known as flexitarian or part-time vegetarian. The biggest growth potential for plant-based protein products, LBI’s researchers hypothesise, may be settled in this consumer group, which makes it essential to learn more about their intentions, wishes and shopping decisions.

The “meat lovers” (25-30%2,3 of the consumers) enjoy eating meat so much that they don’t want to give it up. They relate meat to their status as well as their identity and take pleasure in eating traditional meals instead of trying something new.
The “meat avoiders” also known as vegan or vegetarian are the smallest group (5%2,3). As eating no meat is part of their identity, they reject it for health concerns, ideological or religious reasons. Often, they seek for information on their dietary choices online.4

The current study revealed that environmental concerns, namely the ne 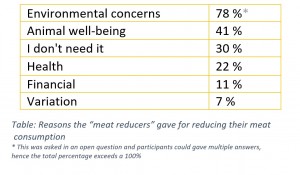 gative ecological impact of meat production and consumption, are the meat reducers’ main motivation for not eating meat at least once a week (see table). This consciousness has increased over the last years (23% in 20115 vs. 78% in 2017). A further interesting outcome is that one third stated that they just don’t need to eat meat. This is a new finding. For a long time, animal protein has been the most important part of a meal and people wouldn’t have given it up easily.2

The recent trend is opening the stage for a less meat-centred eating culture. To support this movement, it is important to have attractive meat alternatives. Therefore, a following article will talk about the LBI’s product testing to investigate which plant-based protein food is popular and demanded.