Plant-based alternatives for milk products are growing in popularity as consumers increasingly replace cow’s milk in their diet for health or lifestyle reasons. PROTEIN2FOOD partner University College Cork examined 17 milk substitutes, based on different cereals, nuts or legumes, and compared them to cow’s milk. They were interested in both their nutritional quality – such as protein content or the effect on blood glucose levels (glycaemic index) – and their technological properties – such as stability of the mixture of fat and water components. 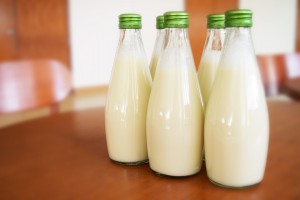 The protein content was determined in two steps. First, researchers analysed total nitrogen content – a main component of proteins. Subsequently, they translated this to protein content1. Half of the samples had low or no protein (less than 0.5%). Only samples based on soya contained as much protein as cow’s milk (3.7%).

The glycaemic index (GI) was not tested in humans but predicted with an in vitro method using test tubes in a lab2.This test revealed that the samples’ effect on blood glucose levels may vary widely. Cow’s milk showed the lowest glycaemic index (GI=47). Rice-based samples appeared to have similar glycaemic properties as glucose (GI up to 100). Almond milk substitutes, for instance, were ranked in between (GI=64). A low effect on blood glucose levels may be a beneficial physiological effect for health3.

Moreover, researchers explored the products’ stability by phase separation analysis using a centrifuge. This test examined how quickly fat and water components were separated from each other. This process is also called creaming. Plant-based milk substitutes were more unstable and had a greater tendency to separate than cow’s milk. Samples based on soya or almond, for example, showed separation rates up to 10%/h. Some rice-based samples exhibited of more than 50%/h. In comparison, the cow’s milk separation rate just amounted to 4%/h. The higher destabilisation rates are more likely to need additional ingredients, such as additives to ensure the products’ quality.

This study revealed that the properties of plant-based milk substitutes can vary widely depending on the plant source, further ingredients or processing. However, since the demand for dairy products is likely to almost double by 2050 it is important to consider plant-based protein alternatives to bovine milk in terms of sustainability4. Manufacturers can improve those by choosing adequate raw materials and tailored processing technologies. Additionally, further research is needed to provide new plant-based milk alternatives with good nutritional values as well as sensory and technological properties. PROTEIN2FOOD plays an important role in developing novel techniques to produce healthy, sustainable and tasty food prototypes.

3 EFSA (2011). Scientific Opinion on the substantiation of a health claim related to “slowly digestible starch in starch-containing foods” and “reduction of post-prandial glycaemic responses” pursuant to Article 13(5) of Regulation (EC) No 1924/20061. Parma, Italy: EFSA.